The Art of Eugene Lefrancois 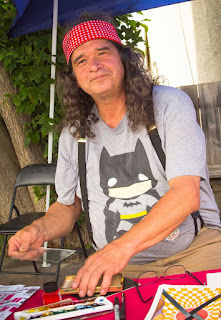 Recently, after confronting a couple local artists who have no issue with adding a few swipes of expressionist paint slaps to the imagery taken or stolen from the Internet and projected onto canvas to avoid using their own imagination it’s wonderful to see the work of an artist genuinely lit up by their own.

Examples of free-flowing streams of consciousness art pieces can be seen at the Growing Season restaurant on Algoma where several of Eugene Lefrancois’ ink and watercolour works hang. With limited reference material influences come from the styles of several artists including Norval Morrisseau, M.C. Escher, and Salvador Dali. The connected long strands and lines are reminiscent of the First Nations artist, Cecil Youngfox. Talking on this surrealist approach Eugene states, “When the pen hits the paper there is no idea what is going to happen… sometimes it works and sometimes it doesn’t.”
And therein is the risk with using one’s imagination, it’s not always fruitful and it’s certainly not always easy or even relatable to others, but it’s a practice worthy of its own merit. Eugene says, “To copy stroke for stroke is wrong. To get inspired by the work is awesome.”
Playing around with line, swirls, patterns, colour and composition the results are little composite dreamworlds where shapes could be symbols which morph into landscapes. The whimsical approach to these small, mostly watercolour and ink works on paper might lack the punch offered by larger paintings done in oil or thick acrylics on canvas, but the airiness and flow of his choice of materials intimate stained glass and fabric works. The light seems to come through the work turning them into little windows, a feat that takes longer to achieve with oils and acrylics.
Earth, sky, birds and specifically the eyes of birds are most often represented where the sun is drawn in a variety of ways to suggest magical powers. The staring birds add a slight sense of the ominous and strength.

Eugene says of his work, “I hope that the people who see my work will see things in a different way. Just to look at a tree for instance is looking at a tree. I feel that a tree is a living being. The only thing is we as humans can't communicate with it. Just like fire and plants. They all have a story and I try to get that story to people who see my work, in a small way.”

Being creative is also therapeutic for Eugene. “I am also an injured worker advocate. I have seen society make a mess of injured workers. Art is my therapy that I use to make sense of it all.”
Eugene has shown his work in Thunder Bay often over the years, painting most of his life as a self taught artist with a creative instinct he says has always been with him, that being inspired to draw and paint was not an event, but born into him. Yet he still needed encouragement to follow his artistic interests and he took it to heart when an elder gave him practical advice, as Eugene relates,“do your own thing if you can afford it.”
And so he did. "Just the sheer act of being able to draw and put it out there is inspiration. To copy stroke for stroke is wrong. To get inspired by the work is awesome."