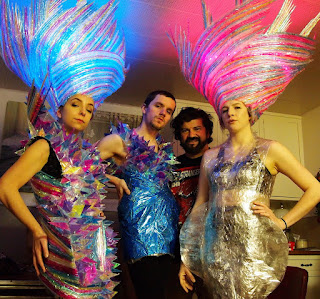 Black Pirates Pub will burst its seams this Saturday, January 27, with a major fashion show organized by the Definitely Superior Art Gallery. This is the gallery’s and Lakehead University Radio’s tenth anniversary fundraiser. The catwalk extravaganza called Derelicte features models wearing both wearable art sold locally at various retail outlets and outfits that may never be worn again. These singular works are amazingly creative one-offs fashioned by fifteen local artists to make aesthetic and social statements.
One artistic costume designer, a local artist whose presence in Thunder Bay is stretching nationally is Michel Dumont. He is on a tight schedule. He has to get his costume completed before he flies off to a Queer and Peace show at the Warren G Flowers Art Gallery in Montreal where he has a work exhibited with others created by prominent Canadian artists. He returns on the day of Derelicte to organize his costumes and get the models into makeup. It takes Michel about a month to make an outfit. He started his latest dramatic creation back in December.
The models Michel is working with will represent two lovers who will spin down the catwalk in a “whirlwind of obsession and break up,” says Michel. “They will be a tornado circling down the catwalk to open up and reveal their inner turmoil, then get back together.”
The dress will be made of packing tape and cellphone crystals to represent the inside of the tornado with an amethyst geode and amethyst heart on the model’s chests. The wigs will employ fibre optics and LED lights to add to the shine. The semi precious pink and purple plastic crystal shapes that mimic semi-precious stones will reflect, refract and project light from the stage. The light will envelop the models and the movement is sure to dazzle.
The name “Derelicte” suggests an association with the forgotten, the vagrant and underprivileged undesirables you might find in ghettos of big cities. Yet because of its association to contemporary art and the catwalks of major cities there can be found elements of haute couture simultaneously projecting the rich and elegant. Thunder Bay’s version of such an event might only mimic such a clash of extreme cultural opposites for artistic purposes and for fun, but this event is as close as you will get to the real deal. And the artists who create their wearable art are certainly up to the challenge of creating pieces worthy of any catwalk in the world.